The winner of the Kenneth Hudson 2021 award is a museum that likes to continuously reinvent itself and challenge its visitors to think and feel about how they co-create a better world. Its way of work has been acknowledged as exemplary more than once but its curiosity about sciences and their contribution to society is never ending.

Established in 1981, the Science Museum of Barcelona closed in 1998 and reopened in 2004 as CosmoCaixa. A new 30,000 m2 permanent exhibition opened in 2019. A project of La Caixa Foundation, the museum occupies a building constructed between 1904 and 1909 as an asylum for the blind. Fully renovated, while preserving its historical façade, and expanded to quadruple its size, the building now houses a world-class science museum. It is dedicated to educating and empowering the public to address social inequities today and protect the planet for future generations.

The new permanent exhibition is in three parts. The first part, beginnings, includes big bang theory, physics (quantum theory, relativity, string theory), and chemistry. The second part deals with evolution and the appearance of homo sapiens. The third part is about the future and how we can solve problems that we, as a species, created. Texts are in four languages: Spanish, Catalan, English, and French.

Inclusive and accessible, CosmoCaixa offers immersive multimedia experiences that engage all the senses as well as the intellect. There is also a planetarium, special opportunities for small children to explore science in playful ways, a library, teaching centre, museum shop, and café. Temporary exhibitions and public programs deal with such topics as 3-D printing, the science and genesis of writing, the geological vitality of the earth, virus trans- mission, and real-world dragons.

By fostering love of nature and scientific curiosity, and appreciation of the contribution of science to society, CosmoCaixa aims to inspire young visitors to become scientists. This is a place to learn, enjoy, take a position, and come together to create a better world. We have the tools. We just need the will.

Here at CosmoCaixa, we want to share just how overjoyed and grateful we are to have received the 2021 Kenneth Hudson Prize from the European Museum Forum, in recognition of our “ability to reinvent ourselves and our interminable contribution to society.” We will keep on working with the same enthusiasm to contribute towards bringing science close to people and building a better society. Thank you to everyone who helps make this possible! 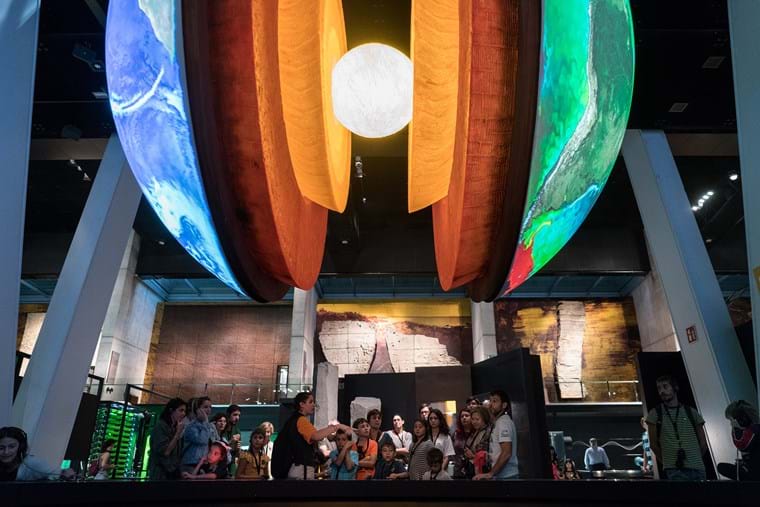